The Meta Quest 2 has had a 120Hz refresh rate as an experimental feature for quite some time. This faster refresh rate in theory means a smoother experience and less chance of motion sickness when playing VR games.

In a recent Tweet, John Carmack, Consulting CTO of Oculus VR revealed that the 120Hz display mode would be turned on by default in future:

120 fps has been an “experimental feature” on Quest 2 for a long time, and we are finally going to make it default-on. Any app that plays 60 fps video should consider 120 fps display — it avoids the flicker of 60 fps display, and makes imperfect release tempo less harsh.

Not all games support this mode though, which is a good thing for battery life but not so much if you’re trying to take full advantage of the Quest 2’s capabilities.

So which Quest 2 games do support 120Hz? Browse on to find out. 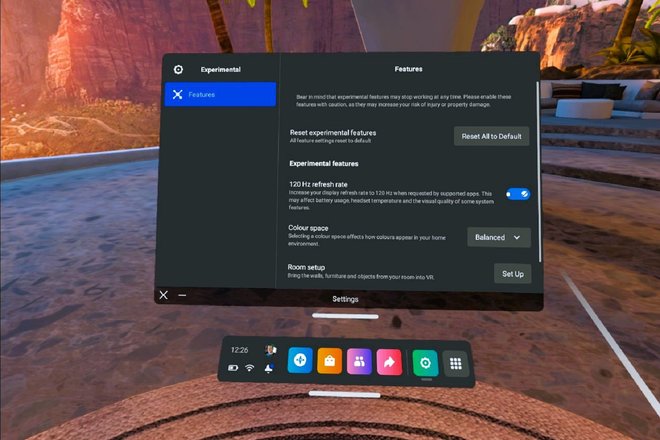 How to check 120Hz is activated on your Quest 2

Before you consider which games support 120Hz refresh rate, it’s worth checking that the setting is available and turned on on your Quest 2.

If you haven’t already, make sure your Meta Quest 2 is updated to the latest firmware.

Then put your headset on and follow these steps:

You’ll be pleased to hear there are a number of games which support a 120Hz refresh rate. It’s up to the developers to add support for it, so more games may well appear in future too.

Still, there are some great games that already support this mode on the Quest 2:

Superhot VR is one of our favourite virtual reality games. A time-bending shooter that makes you feel like Neo from the Matrix as you dodge bullets and baddies on your way to victory.

You wouldn’t want to lose your table tennis match because you had a low refresh rate and didn’t see the ball coming. So this is another logical fit for the 120Hz refresh rate mode.

Apparently, there’s more than one table tennis game with support for a fast refresh rate on the Quest 2. Eleven Table Tennis is said to be the most realistic table tennis experience that you can get on the platform though, so why not give it a go?

Echo VR is a free-to-play multiplayer game that’s set in zero gravity. One of the most popular games on the Quest 2 and a brilliant, fast-paced game that’s perfect for 120Hz. Plus it’s free, so why not give it a go?

Gorn is one of the silliest and goriest fighting games we’ve played. A bonkers but fun game full of plenty of giggles and good times. Not as fast-paced as some other games, but it’s still one to benefit from the 120Hz capabilities.

It might not be as popular as Beat Sabre, but Synth Riders is one of the original VR rhythm games on Quest and now it runs with a smoother frame rate thanks to 120Hz support.

Cubism seems like an odd choice for 120Hz but it works. This is a a deceptively simple puzzle game with a relaxing vibe and 90 puzzles to complete.

As you might expect, everyone’s favourite rhythm game does support a 120Hz refresh rate. So now you can jam out and smash those cubes while experiencing a smooth and satisfying experience.

Here’s a nifty game which is a tactical workout survival game which depends on you moving to survive. Where every movement counts it’s important to see what’s coming and have smooth visuals.

Ironlights is a VR duelling game where swift and skilful movements are the key to victory. Offering both single and multiplayer experiences, this game surely makes the most of the smooth 120Hz action.

Until you Fall is described as a hack-and-slash roguelite which features frantic fighting that has you casting spells, slashing swords and dodging your way to victory. Another fast-paced adventure which makes the most of the fast refresh rate on offer.

If you’ve ever wanted to play a Battle Royale in virtual reality then this is it. Such a frantic adventure might be a bit nauseating for some though, which is why it’s good news that this one has 120Hz refresh rate too.

Hyper Dash is a VR multiplayer team-based shooter with fast and fun action and lots of dashing about the place (hence the name). Makes sense that this one would have support for 120Hz and it really helps.

Virtual Desktop is handy when you’re connected to your gaming PC instead of using Oculus Link. Virtual Desktop supports 120Hz which means that you can play PCVR games while making the most of that refresh rate. So this opens up games on Steam as well as the Quest store.